Harmony of the Gospels

Strong meat belongeth to them that are of full age, even those who by reason of use have their senses exercised to discern both good and evil. Heb 5:14 We speak the wisdom of God in a mystery, even the hidden wisdom, which God ordained before the world unto our glory: Which none of the princes of this world knew: for had they known it, they would not have crucified the Lord of glory. But as it is written, Eye hath not seen, nor ear heard, neither have entered into the heart of man, the things which God hath prepared for them that love him. But God hath revealed them unto us by his Spirit: for the Spirit searcheth all things, yea, the deep things of God. For what man knoweth the things of a man, save the spirit of man which is in him? even so the things of God knoweth no man, but the Spirit of God. Now we have received, not the spirit of the world, but the spirit which is of God; that we might know the things that are freely given to us of God. 1 Cor 2:13  Which things also we speak, not in the words which man's wisdom teacheth, but which the Holy Ghost teacheth; comparing spiritual things with spiritual. But the natural man receiveth not the things of the Spirit of God: for they are foolishness unto him: neither can he know them, because they are spiritually discerned. But he that is spiritual judgeth all things, yet he himself is judged of no man. For who hath known the mind of the Lord, that he may instruct him? But we have the mind of Christ. 1 Cor 2:7-16

For Bible Studies by John Darash go to http://thebibleonly.net/studies/bible.htm

2 Tim 2:15-19 Study to show thyself approved unto God, a workman that needeth not to be ashamed, rightly dividing the word of truth. But shun profane and vain babblings: for they will increase unto more ungodliness. And their word will eat as doth a canker: of whom is Hymenaeus and Philetus; Who concerning the truth have erred, saying that the resurrection is past already; and overthrow the faith of some. Nevertheless the foundation of God standeth sure, having this seal, The Lord knoweth them that are his. 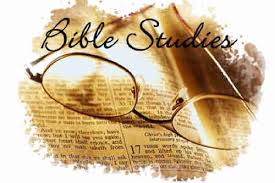 And, Let every one that nameth the name of Christ depart from iniquity.

Harmony of the Gospel
Through the Gospel of Mark, by Harold Camping

I am so grateful for the story about "just push." I have been so, so wrapped up in this freedom movement that I have lapsed in my prayers. And I know in my heart that I am where I am for a reason. And know that no matter how much freedom we gain from our government. None of us are truly free without the Lord. Only he can set us free. Thank you so much for that post. And keep pushing

If you will, join me and the many for a Partial/Daniel Fast [election day/6am-3pm].
Partial Fast: A partial fast is from 6:00 am to 3:00 pm or from sun up to sundown.
Daniel Fast: Eat no meat,no sweets and no bread.Drink water and juice.Eat fruits and vegetables.
more on FASTING TYPES... https://www.jentezenfranklin.org/fastingtypes

Is there Bible Study this week?

living out Christ as our example

I'm sorry but the VOIP dialer in my browser end my call prior to you getting to me in the queue, and when I reconnected I could not get back into the queue for some reason before you ended the call.

I just wanted to say how much I appreciated your comment about us Christians being like Christ and slow to anger and judging others, without first ensuring our own thoughts and conduct are in line with God's will and His Word. I think that many Christians today (myself especially), are very quick to place blame and head straight into the "fight" with our enemies, rather than doing what you mentioned - praying for them! I have a dear brother in the Lord who has been my mentor for many years now, and he has so often reminded me that God's Word clearly teaches us to forgive and to pray to God that he would reach our/his enemies and change their hearts. THAT, is the only true way for non-Christians to stop doing evil and become our brothers and sisters.

Thanks for being a tempered sword for God John, and helping us proceed with caution and reverence in both our Christian walk and also in fixing our great nation!

Happy Lord's day to all of you who are our brothers and sisters in our Lord Christ Jesus. It is a great blessing to have a leader such as John, who is so obviously versed in God's Holy Word and it's meaning!

This morning was my first time joining our study live, and I must admit to having a little trouble keeping up with John in pulling up the scriptures before he begins reading (I'm using biblegateway.com rather than my actual Bible, as it's much easier and quicker to simply type in the next scripture and hit enter and you're instantly there). I'm guessing that John uses an outline or other study material, and if so I would love to get a copy prior to the beginning of each study. Perhaps simply a brief list of certain (and probable) scriptures to be read would greatly assist us in maintaining our attention on the scripture being read rather than finding it or worse yet completely missing the current scripture being read.

Thanks again John, for both caring enough to do these much needed studies, and especially doing such a truly spectacular job!!

Thank you John for the Scripture readings on Sundays. I never get enough Scripture. The Word is so powerful it can convert hearts of stone! God's love for mankind is clear! Thanks for being there for us. God bless you and your family.

Where were these moved to. Please send me a link for the 28 lessons that were done on Rev. along with the four review links. What is the new location for those audios?

A man was sleeping one night in his cabin when suddenly his room filled with light, and GOD appeared. The Lord told the man he had work for him to do, and showed him a large rock in front of his cabin. The Lord explained that the man was to Push against the rock with all his might.....

So, this the man did, day after day. For many years he toiled from sunup to sundown, his shoulders set squarely against the cold, massive surface of the unmoving rock, Pushing with all his might!

Each night he returned to his cabin sore and worn out, feeling that his whole day had been spent in vain. Since the man was showing discouragement, the Adversary( Satan) decided to enter the picture by placing thoughts into the mind: ( He will do it every time)!

" You have been pushing against that rock for a long time and it hasn't moved." Thus, he gave the man the impression that the task was impossible and that he was a failure. These thoughts discouraged and disheartened the man.

Satan said, " Why kill yourself over this? Just put in your time, giving just the minimum effort; and that will be good enough."

That's what the weary man planned to do, but decided to make it a matter of Prayer and to take his troubled thoughts to the Lord.

"Lord," he said "I have labored long and hard in your Service, putting all my strength to do that which you have asked. Yet, after all this time, I have not even budged that rock by half a millimeter. What is wrong? Why am I failing?"

The Lord responded compassionately, "My friend, when I asked you to serve Me and you accepted, I told you that your task was to Push against the rock with all of your strength, which you have done. Never once did I mention to you that I expected you to move it. Your task was to push. And now you come to Me with your strength spent, thinking that you have failed. But, is that really so? Look at yourself. Your arms are strong and muscled, your back shiny and brown; your hands are callused from constant pressure, your legs have become massive and hard. Through opposition you have grown much,and your abilities now surpass that which you used to have. True, you haven't moved the rock. But your calling was to be Obedient and to Push and to exercise your Faith and trust in My Wisdom. That you have done. Now I, my friend,will move the rock."

At times, when we hear a word from God, we tend to use our own intellect to decipher what He Wants, when actually what GOD wants is just Simple Obedience and Faith in Him. By all means, exercise The Faith that moves mountains, but know that it is still God Who Moves The Mountains.

I am glad John is doing this again; it's a blessing to get to know our Heavenly Father and his Son. I am delighted to be in church on Sundays from 9-10 for a new member's class, 10-12 for the Sunday service and at 6 PM for Bible Study and prayer. On Wednesdays I am at another Bible study & prayer until just before the Wednesday night call. If I did not not have these opportunities with a wonderful church family, I'd definitely be on the Sunday morning call. If I get the time, I will listen in or download the call.

Thanks, John, for keeping our Heavenly Father front and center. THAT is what makes this effort vastly different from all the others.